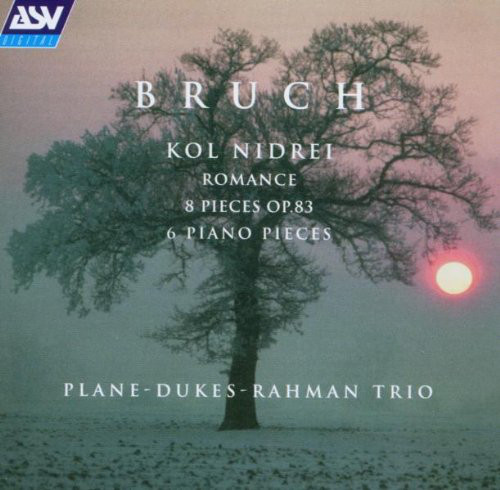 In this impressive collection of chamber music by Bruch, the Plane-Dukes-Rahman Trio have once again attained the highest musical standards in their dedicated, sensitive performance. This disc was recorded to mark the 10th anniversary of the Trio in Sept 2002 and represents their ongoing commitment to chamber music, especially since it features three pieces which have never before been recorded.

‘Kol Nidrei’ was originally conceived as an adagio for orchestra, but Bruch also prepared versions for solo instruments with the piano and it’s performed hereon the viola. This peaceful, calm work, inspired by a traditional Jewish melody, floats along on the deliciously even tone of Philip Dukes, sensitively accompanied by Sophia Rahman. As a whole the piece contains moments of drama, whilst the intimacy of the viola tone and lushness of texture highlight the beautiful, almost haunting theme.

The ‘Romance’ has an impassioned eloquence which is especially captivating. The ongoing interaction between the piano and viola keeps the melody interesting, but the dramatic parts, in particular, could have been intensified with a greater use of dynamics or phrasing, but that doesn’t detract too much from the overall mesmerising performance.

A consummate pianist himself, it seems strange that Bruch considered the instrument a ‘dull little trap’. Fortunately you get no sense of his disillusion in Sophia Rahman’s engaging performance of his ‘Six Piano Pieces’.

The final ‘8 Pieces for clarinet, viola and piano’ on this disc are full of crystal-clear melodies, highlighted throughout by lyrical sweeps of phrasing in an immaculate performance.

Overall, a cd of simple, vivid, romantic beauty. Nothing is over-stated or over-elaborated and the purity wins through in a fantastic album which would make an excellent addition to any collection.