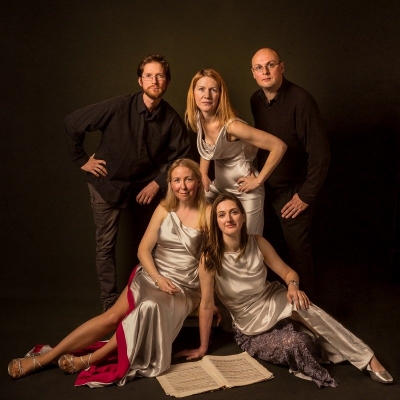 Former BBC New Generation Artists, the Galliard Ensemble is established as one of Britain’s leading chamber groups, with repertoire ranging from Mozart and Beethoven to Berio and Birtwistle.

Currently in its 28th year, the ensemble has performed in many of the world’s leading venues and festivals, including the Wigmore Hall, South Bank Centre, Bridgewater Hall, Sage Gateshead and at the BBC Proms.

They have also performed in Portugal, Spain, France, Ireland and Slovenia and are frequently broadcast on BBC Radio 3 and around the World.

The Galliard Ensemble is known for its virtuosic, entertaining and distinctive performance style and its recordings have been widely praised; the Sunday Times, BBC Music Magazine, Gramophone, and BBC Radio 3 have all selected a Galliard Ensemble CD as “outstanding” or as Critics’ Choice.

They have worked closely with many leading contemporary composers, including György Ligeti and with Sir Harrison Birtwistle, on his quintet Five Distances (for their performance at the BBC Proms) which led to their award-winning CD of Birtwistle’s chamber music for winds.

In 2013 they ran the ‘Galliard Anniversary Composition Competition’ to mark their 20th year.

The Galliard Ensemble is passionate about bringing music to a diverse audience realising the positive impact that music can have on learning and personal development. Their educational work ranges from concerts for children to masterclasses at leading conservatoires and universities such as Royal Northern College of Music, University of Cardiff, Trinity Laban, and at the Royal Welsh College of Music and Drama.

‘Pure pleasure… This in short is wind quintet playing of great distinction…
From this admirably recorded disc you also get a very good idea of
how enjoyable the Galliard’s public concerts must be.
Strongly recommended.’ Gramophone Magazine