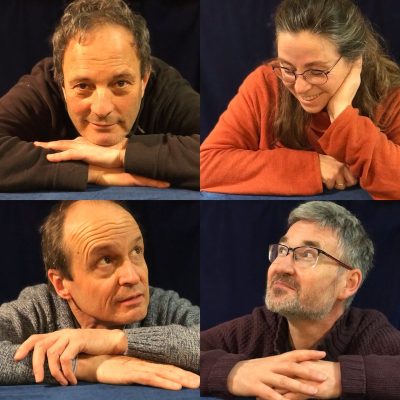 Robert Plane and the Gould Trio have been giving concerts, recording and touring together for thirty years.

They were initially brought together in performances of Messiaen’s monumental Quartet for the End of Time, a work of extraordinary power, luminous beauty and spiritual enrichment. They’ve given countless performances over the years, particularly in 2008, the centenary of Messiaen’s birth, when they also made their CD recording for Chandos, hailed by BBC Music Magazine as the ‘finest modern recording’ of this epic masterpiece, and garnering acclaim across the press.

‘Its performance here is exemplary.’ Album of the Week, The Independent

Perhaps the immensity of Messiaen’s work is responsible for the relatively few works for this combination of instruments. In a quest to change this the ensemble asked composer Huw Watkins to compose for them, to mark the 20th-anniversary of the Corbridge Chamber Music Festival, which they direct together in Northumberland. With co-commissioners the Swansea International Festival, Three Choirs Festival and the Wigmore Hall onboard, they gave the premiere of ‘Four Fables’ at the Three Choirs Festival in Hereford on July 31st 2018. Thrilled that Huw produced such an inspired, poetic and exhilarating work for them, the dedicatees have already given over twenty-five performances, from the Wigmore Hall and a US premiere in Portland, Oregon at the distinguished Friends of Chamber Music series, to Festivals and music societies throughout the UK. They have recently explored the music’s natural affinity with movement in performances with dancer Mayuri Boonham.

Their CD collaborations include cycles of the complete trios of Beethoven and Brahms, as well rarities of the twentieth century English repertoire by Bax, Stanford, York Bowen, Cyril Scott and Robin Milford.