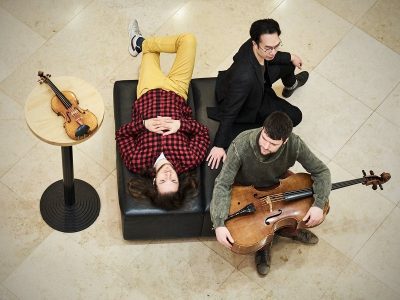 The Linos Piano Trio’s colourful and distinctive musical voice draws on the rich cultural and artistic backgrounds of the three musicians. Their seven languages, five nationalities, and breadth of specialisms ranging from historical performance to new music, contribute to their multifaceted and personal performances. Alongside a commitment to the genre’s masterpieces, Linos expands the repertoire by championing hidden gems and creating new trio transcriptions.

Praised for its “slow-burning, gripping performance” by The Strad, and “virtuosity, presence of mind, and wit” by the Süddeutsche Zeitung, the Linos Piano Trio’s reputation has taken it to prestigious stages and festivals internationally, including London’s Southbank Centre, Barbican and Wigmore Halls, Melbourne Recital Centre, Muziekgebouw Eindhoven, Holzhausenschlösschen Frankfurt, Nikolaisaal Potsdam and Théâtre Saint-Louis France.

Of the ensemble’s numerous awards and affiliations, the Linos Piano Trio was the First Prize and Audience Prize winner of the Melbourne International Chamber Music Competition 2015, the 2014 winner of the Royal Philharmonic Society’s Albert and Eugenie Frost Prize, and has been Carne Ensemble-in-Residence at Trinity Laban Conservatoire since 2017.

The Linos Piano Trio was the first to record the complete Piano Trios by C.P.E. Bach, issued by CAvi-music in 2020. This release received several five-star reviews from across the European press, with Gramophone magazine describing the playing as “smart, efficient and alert to Bach’s quicksilver changes of mood and material”.

Formed in London in 2007, the Linos Piano Trio studied at the Guildhall School and then at the Musikhochschule Hannover with Professors Oliver Wille and Markus Becker. The ensemble also received generous scholarships from London’s ChamberStudio and Paris’s ProQuartet programmes to conduct its further studies with Sir András Schiff, Peter Cropper, Ferenc Rados, Rainer Schmidt and Eberhard Feltz, all of whom were highly influential in forming Linos’ musical approach.

In 2016 the trio embarked on its current ongoing project ‘Stolen Music’, a rapturously-received series of orchestral masterpieces collaboratively reimagined for piano trio. Inspired by Stravinsky’s notion of creative ‘stealing’, the members of the Trio work together to present these large-scale works as if they had been originally written for piano trio, with featured repertoire including Ravel’s La Valse, and Dukas’s Sorcerer’s Apprentice. The trio will soon launch Linos Edition, its own digital sheet-music publication of Stolen Music.

Their recording of Stolen Music for CAvi-music in partnership with the Bayerischer Rundfunk was released in May 2021, and features four important turn-of-the-century works, centred around the theme of transformation. The Strad called it “compelling, dramatic, fascinating and unfailingly musical”, and the disc also received first prize in the chamber music category of the prestigious ‘Preis der deutschen Schallplattenkritik’ (German Record Critics Award).

The Linos Piano Trio directs the Linos Festival in Cologne: an annual festival where the trio is joined by other musicians, expanding programmes and concepts beyond the trio repertoire.

Thai-born London-based musician Prach Boondiskulchok enjoys a uniquely diverse career as a pianist, fortepianist, and composer. Equally at home improvising 18th C. ornaments and composing with microtonal harmonies, Prach’s performances have taken him to international stages and festivals. His collaborations have included recitals with Steven Isserlis, Roger Chase, and Leonid Gorokhov. Prach’s works include chamber song cycle Goose Daughter, premiered in New Orleans, New York, and London in 2016-17, and Ritus for String Quartet, commissioned by the Endellion Quartet for its 40th anniversary in 2019, and praised as “a work of great charm” by The Guardian. Prach is an artistic researcher at the Orpheus Institute, and teaches piano and chamber music at the Royal College of Music in London.

With his vivid performance style and natural flair for entertaining, London-born German-Brazilian violinist Konrad Elias-Trostmann breaks down the wall so often found between audience and performer. Chamber music performances have brought him to venues such as Carnegie Hall, Wigmore Hall, Melbourne Recital Centre, Seoul Arts Centre, and Sala Cultural Itaím São Paulo. Recently Konrad was appointed Principal 2nd Violin of the Essen Philharmoniker and he is regularly invited as guest Principal 2nd Violin or Assistant Concertmaster by world-renowned orchestras. Konrad is currently based in Cologne and spends his free time doing yoga, enjoying a vibrant social life, and gathering inspiration from the music of some of his greatest influences such as Whitney Houston and Dolly Parton.

Berlin-based French-born multi-faceted musician Vladimir Waltham is equally at home on Cello, Baroque Cello, and all sizes of da Gamba instruments. Praised for his “luminous tone” by Gramophone, Vladimir is passionate about sharing the broadest possible musical palette, in repertoire spanning from the Middle Ages to collaborations with composers and world premieres as well as everything in between. Vladimir has performed in concert halls all around the world with his ensembles the Linos Piano Trio and La Serenissima, but also regularly appears as a guest soloist and chamber musician in halls and festivals worldwide. When not busy travelling and performing, you can find Vladimir at home enjoying his love of cooking and of coffee, or taking his family on a hike in the mountains.

Linos (Λῖνος) was a celebrated musician in Greek mythology. The son of Apollo, Linos received from his father the three-stringed lute, sometimes depicted as the lyre. As one of the original demi-gods of music, Linos had many pupils, most famously Heracles and his brother Orpheus. Linos was known as the inventor of new melodies, lyric songs, and eloquent speech.