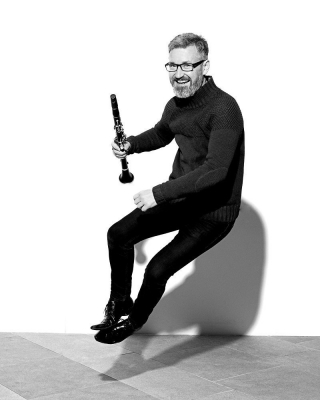 Robert Plane’s hugely varied career has seen concerto appearances in Europe, Asia and the USA, with performances of the Mozart Clarinet Concerto in Madrid with the City of London Sinfonia, Beijing with the BBC National Orchestra of Wales and in the USA with the Virginia Symphony. He made his BBC Proms debut at the Royal Albert Hall in 2011 with Simon Holt’s double concerto ‘Centauromachy’. Exploring a wide range of repertoire and commissioning new works, highlights of past seasons have included Piers Hellawell’s Agricolas with the Ulster Orchestra and RTE Symphony Orchestra, Finzi with the Zurich Chamber Orchestra, Christian Jost with the Dortmunder Philharmoniker and Stanford with the Bournemouth Symphony Orchestra.

Rob has tirelessly pursued a particular passion for British clarinet music in concert and on disc, his Gramophone Award winning account of Finzi’s Concerto and Gramophone Award-shortlisted Bax Sonatas being just two of a large collection of recordings of works by the great English Romantics. He has performed and recorded with the Gould Piano Trio for thirty years, and their recording of Messiaen’s Quartet for the End of Time to mark the composer’s centenary was hailed by BBC Music Magazine as the ‘finest modern recording’ of this epic masterpiece. He also appears on the Goulds’ recorded cycles of Beethoven and Brahms Trios and makes regular tours to the USA with them. They commissioned Huw Watkins to compose ‘Four Fables’ in 2018, in celebration of the twentieth anniversary of the Corbridge Chamber Music Festival which they direct together in Northumberland.

Rob has explored the clarinet quintet repertoire with a number of the finest string quartets, opening BBC Radio 3’s ‘Brahms Experience’ with a live broadcast from St. George’s Bristol of the Brahms Quintet with the Skampa Quartet and twice joining the Elias String Quartet at the Wigmore Hall during the 20/21 season for Brahms and Bliss Clarinet Quintets. He has given concerts in Germany and the USA with the Mandelring Quartet and at home in the UK with the Maggini, Carducci, Tippett, Dante and Sacconi Quartets.  He has recently forged new relationships with the Marmen, Solem and Brodsky Quartets.

Rob was invited to become clarinettist of Ensemble 360 in February 2022 and looks forward to exploring chamber music of all kinds with them at their home in the Crucible, Sheffield and country-wide in the years to come.

Rob has enjoyed a thirty-year long relationship with the Royal Over-Seas League since winning the competition’s Gold Medal in 1992, highlights of which have included a recital tour of New Zealand and a gala performance of Bruch’s Double Concerto with the Symphony Orchestra of Sri Lanka in Colombo as part of the Commonwealth Heads of Government meeting.

Always keen to take on a challenge, Rob gave his first performance of Boulez’s epic ‘Dialogue de l’ombre double’ at the Belfast Sonorities Festival in 2018, a work he subsequently revived in Manchester’s Stoller Hall in 2019. Cross-discipline collaborations have included performances with leading South Asian dance specialist Mayuri Boonham. His delving into unjustly neglected works has unearthed concertos by Iain Hamilton, Ruth Gipps and Richard Walthew which he subsequently recorded at Glasgow City Halls with the BBC Scottish Symphony Orchestra and Martyn Brabbins. The resulting disc, ‘Reawakened’, was released by Champs Hill Records in July 2020. Rob will record the clarinet concertos of Diana Burrell and Mark Boden with the BBC Philharmonic in December 2022, to feature on a disc alongside chamber works by Huw Watkins and Sarah Jenkins, all of which he commissioned and premiered.

Rob was principal clarinet of the BBC National Orchestra of Wales for over twenty years and has held the same position with the City of Birmingham Symphony Orchestra and Royal Northern Sinfonia. In a distinguished orchestral career, he has performed as guest principal clarinet with the Chamber Orchestra of Europe, Concertgebouw Orchestra Amsterdam, London Symphony Orchestra and in Aurora Orchestra’s performances of Brahms 1 from memory.  A respected teacher and educator, he holds the post of Head of Woodwind Performance at the Royal Welsh College of Music and Drama.