Percy Sherwood is coming in from the shadows. His Double Concerto, Piano Concertos and Cello works have been recorded and now it’s the turn of Lyrita to promote and premiere on disc his two-piano works, the Suite and the Sonata. Both have been edited by Hiroaki Takenouchi (one of the pianists here, along with Simon Callaghan) from manuscripts held by the Bodleian Library and have recently been published, for the first time, by Nimbus Music Publishing.

The Suite for two pianos was first known to have been performed in 1902 in Dresden. It’s very clearly intended for domestic rather than public music-making and is cast in five movements …. Sherwood’s influences in this work are decidedly Classical, though Schubert is certainly the influence in the powerful central Romanze and Mendelssohn haunts the succeeding Scherzo.

The Sonata for two pianos is a slightly earlier work dating from 1896, though several movements had been more or less successfully completed in 1890. Its manuscript too is held by the Bodleian. The opening movement of this orthodox four-movement piece is in traditional sonata form and here the more contemporary influence of Brahms can be felt. It’s an altogether more serious and more commanding work than the easy-going Suite, as befits its sonata status ….

Whilst both of Sherwood’s pieces are new to disc, Parry’s Grosses Duo has been recorded before. It was written when he was around 27 and whilst it reveals the influence of Bach it’s not a neo-Baroque work, much less a pastiche, though Parry whips up the saturated organ sonorities with youthful relish at the end of the opening movement to suitably ripe effect. The central movement is very different, inhabiting the world of Romanticism and, like Sherwood’s Sonata, more reflective of the contemporary influence of Brahms, before returning in the finale to the Bachian ethos with a prelude and fugue. This was Parry’s only two-piano work.

With fine notes and a recording to match, there’s nothing to dislike here and much to admire. 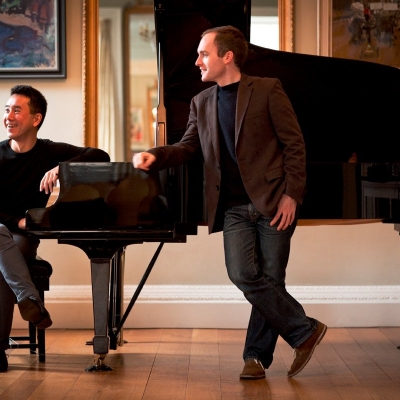