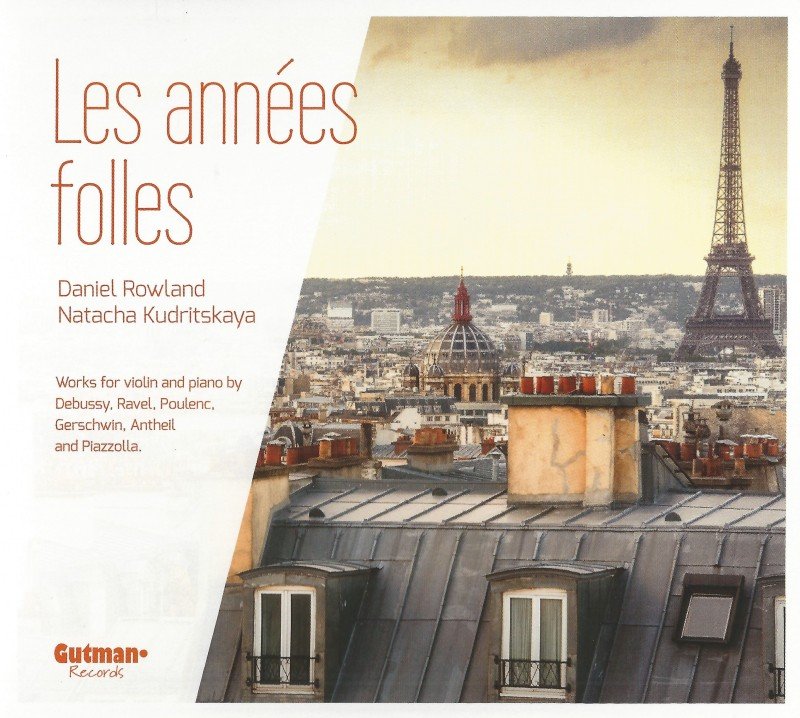 Violinist Daniel Rowland was born in London but moved as a child to the village Weerselo in Twente, where he lived for fifteen years. His father is the British composer and conductor David Rowland (1939-2007), who taught at the Twente Conservatory. Daniel studied in the Netherlands with Davina van Wely and in Brussels with Igor Oistrakh. He learned much from the legendary virtuoso and pedagogue Ivry Gitlis. Rowland has been the  first violinist of the Brodsky Quartet since 2007, and in 2005 began his own festival in Weerselo, the Stift Festival, where there is an emphasis on less familiar and contemporary chamber music.

Rowland presents this CD under the title Les années folles… Rowland has three sonatas included here, interspersed with smaller vignettes and finally a Sonata by George Antheil, the ‘American in Paris’ which was the personification of the roaring twenties.

The CD was released by Gutman Records, a foundation which endeavours to promote high quality chamber music. With this disc the foundation have scored a hit. Daniel Rowland and his piano playing partner Natacha Kudritskaya stand together as a  guarantee of quality. Those familiar with Rowland know he gets a wonderful tone from his Storioni, technically has no limits and has perfectly pure intonation. Rowland is also a true musical storyteller who in all facets of his art nuances even the smallest details, whether it in terms of bowing, vibrato or portamento. The latter is an essential aspect of his violin soul, where he treats extraordinarily imaginatively, without even for a moment lapsing into false sentimentality. In for example the Sonata by Ravel we know that such an approach can be of tremendous benefit – not for nothing is the second movement  called ‘Blues’.  But also the sonata by Debussy is stripped clean of dust in this way and shines as new in all its glory. A splendid edition by a great violinist.

A powerful communication of the heart of the music

Authenticity you might expect to hear from violinists such as Ivry Gitlis, Ida Haendel, Isaac Stern

Daniel Rowland has a powerful, glamorous tone, gleaming at the top and throaty and rugged down at the bottom, and Natacha Kudritskaya matches him every bar of the way for passion, fantasy and precision.

Rowland and Kudritskaya demonstrated their unique musical partnership impressively, and their well-balanced interplay was not only beautiful to listen to but also exciting to watch