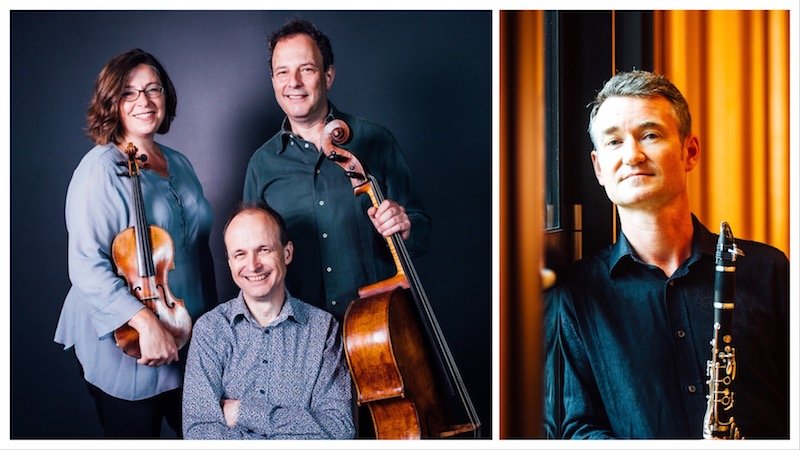 Robert Plane and the Gould Piano Trio look forward to performing as part of Wigmore Hall’s major re-opening festival in May.

To mark their re-opening after the last very challenging year, Wigmore Hall will welcome back live audiences for a 25-concert festival, combined with a celebration of the Hall’s 120th Anniversary.

This festival will include a concert by Rob and the Gould Piano Trio at 7:30pm on Wednesday 26th May, where an in-person audience will be able to enjoy music by Olivier Messiaen and Huw Watkins.

The concert programme puts together two of the ensemble’s favourite works. Messiaen’s monumental Quartet for the End of Time is certainly the best-known piece for this unusual combination of instruments, and it was for a performance of this work that the Gould Piano Trio and Robert Plane first came together more than 25 years ago. A work of extraordinary power, luminous beauty and spiritual enrichment, they have given countless performances over the past two decades, including making their CD recording for Chandos in 2008, the centenary year of Messiaen’s birth.

Alongside the Messiaen stands Four Fables by Huw Watkins, a new work conceived for this ensemble to contrast with the Messiaen, co-commissioned in 2018 by Wigmore Hall, along with the Three Choirs Festival, Corbridge Chamber Music Festival and Swansea International Festival, with financial assistance from RVW Trust and PRS Open Fund. Since giving its premiere performance at the 2018 Three Choirs Festival, Rob and the Goulds have already performed Four Fables seventeen times in the UK and on tour in the USA, as well as making a recording on Resonus Classics for release later this year. As well as its upcoming performance at Wigmore Hall, the work will also feature in collaboration with the dancer Mayuri Boonham at this year’s Corbridge Chamber Music Festival, where Rob and the Goulds are joint Artistic Directors. Robert Plane comments:

It is a wonderful work, beautifully crafted, exquisite textures, touching harmonies and gloriously individual. We’re thrilled to have been able to perform it so widely already, and delighted to be giving its London premiere as part of such a momentous festival at Wigmore Hall.

After a tumultuous year that saw Wigmore Hall streaming more than 200 concerts by 360 artists to over 6 million viewers and radio listeners across the globe, generating more than £1-million in online donations, Wigmore Hall will welcome the return of live audiences from 17 May for its re-opening festival. The festival will feature world-leading artists, culminating in a major celebration of the Hall’s 120th Anniversary on the 31st May, which will be headlined by the appointment of 9 new Associate Artists. Alongside these events they will also be running Wigmore Hall Learning Festival, exploring a theme of ‘Connectivity’ and focusing on music’s role in the face of isolation.

Tickets for all 25 concerts in the re-opening festival are available initially on a ballot basis to Friends of Wigmore Hall which can be joined for as little as £50 a year — click here for more information. The first ballot is due to take place on 26 April, and seating capacity will be determined by government announcements in the coming weeks.