Tashmina Artists is delighted to welcome the multi-award-winning Ferio Saxophone Quartet to the roster. As one of the leading British saxophone quartets among the new generation of artists they have received deservedly enthusiastic reactions from audiences and critics alike.

In 2015 Ferio made their debut at the Purcell Room, as winners of The Philharmonia /Martins Musical Ensemble Award and during the same year were winners of the Royal Over-Seas League’s Ensemble Competition. They received the Tunnell Trust Award in 2014/15 and are Park Lane Group Artists for the 2016 season.

Ferio has performed at London’s Southbank Centre and Conway Hall, Cambridge Summer Festival, Three Choirs Festival and has given concert tours in Scotland and the Channel Islands. In a busy year ahead they will perform at Edinburgh Fringe, Brighton, Newbury, Machynlleth and Petworth Festivals and make their Wigmore Hall debut.

We are also able to share with you that the Ferio Saxophone Quartet has just been appointed as one of St John’s Smith Square’s  Young Artists. As a result they have been awarded three performance dates in St John’s Smith Square over the course of the concert season, ranging from lunchtime concerts to full evening recitals and Sunday afternoon chamber music concerts. During their year on the scheme, the  Young Artist programme will also involve the quartet in a number of projects focussing on marketing, commissioning and outreach work.

Commissioning new music is an important strand of Ferio’s work. They have been working closely with composer Guillermo Lago on his collection of ‘Ciudades’ pieces and are the first quartet to have recorded his new compositions “Köln” and “Tokyo”. As Park Lane Group Artists, they recently gave the world premiere of a work by Laura Bowler. 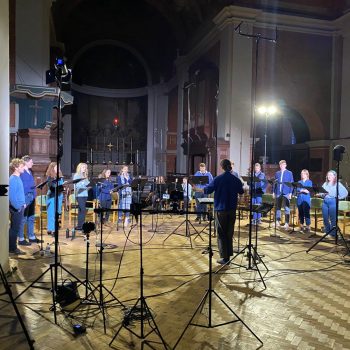