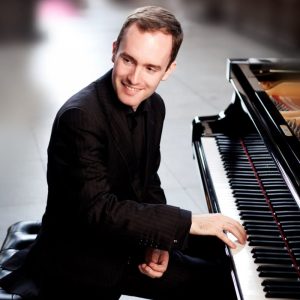 Praised for his ‘velvet-gloved pianism of ravishing sensitivity’ (The Strad), Steinway Artist Simon Callaghan performs internationally as a soloist and chamber musician. His recent tours have taken him to Japan, Malaysia, Thailand, Hong Kong, Canada and throughout Europe. He has performed at all of the UK’s major concert halls including Wigmore Hall, Royal Festival Hall, Birmingham Symphony Hall, Liverpool Philharmonic Hall, St David’s Hall Cardiff and Manchester’s Bridgewater and Stoller Halls.

Simon has a particular interest in bringing rarely performed works to new audiences, and his growing reputation in this field has led to invitations for both recordings and live performances. His 2017 recording of the concertos of Roger Sacheverell Coke for Hyperion’s lauded series The Romantic Piano Concerto, with the BBC Scottish Symphony Orchestra and Martyn Brabbins, reached no. 2 in the specialist classical charts, with enthusiastic reviews across the press. This début Hyperion CD was followed in 2018 by a collaboration with conductor Ben Gernon to record concertos by Rheinberger and Scholz. Two further concerto discs (with the Sinfonieorchester St Gallen) will be released in 2022. Invitations to perform in concert include concertos by Françaix and Tippett and the first UK performance since 1946 of Medtner’s 3rd Concerto.

Simon’s first solo disc for Hyperion, world premiere recordings of works by Jean Louis Nicodé, was released in 2019 to critical acclaim, with Gramophone praising his “superb artistry”. The most recent additions to Simon’s catalogue of solo recordings are sets of miniatures by Schumann and Poulenc, released in 2019 on Nimbus, and the first complete survey on disc of George Dyson’s music for piano, for SOMM in 2020. November 2020 saw the release of the first disc in Simon’s latest project, to record all of Poulenc’s piano music: The Story of Babar, the Little Elephant, narrated by Miriam Margolyes. His newest recording, of Joseph Holbrooke’s late piano works, was released by Lyrita in October 2021.

Simon’s discography also includes solo works by Sterndale Bennett, Parry and Sacheverell Coke, chamber music by Brahms, Schumann, Chopin and Ravel, and recordings of music for two pianos by Parry, Sherwood and Delius with Parnassius Duo partner Hiroaki Takenouchi. In 2020 Simon and Hiroaki released arrangements for two pianos by Camille Saint-Saëns of Sonatas by Chopin and Liszt, on Nimbus. He has also recorded for Danacord, Somm, Resonus and EM Records, and has expanded his role to both artist and producer in an exciting association with Nimbus and Lyrita. Releases on Lyrita include the world premiere recording of Roger Sacheverell Coke’s cello sonatas with Raphael Wallfisch.

Contemporary music performances have included works by Joseph Phibbs, Julian Anderson and Kenneth Hesketh, and he was invited by the Royal College of Music to play Boulez’s ‘Dérive II’ as part of their ‘Variable Geometry’ series. His world premiere recording of Paul Patterson’s ‘Allusions’ for two violins and piano (with Midori Komachi and Sophie Rosa) was released in 2017.

Simon puts great value on teaching and has recently given masterclasses at Chetham’s School of Music and the Royal Birmingham Conservatoire. In the coming season he will give masterclasses, lead a chamber music course at Benslow Music and continue his work as Head of Piano at the Ingenium Academy (Winchester). In addition to his performing schedule, Simon is Director of Music at Conway Hall, where he oversees the longest-running chamber music series in Europe. In 2020 the Royal Northern College of Music awarded Simon a PhD in Performance for his work on Roger Sacheverell Coke.