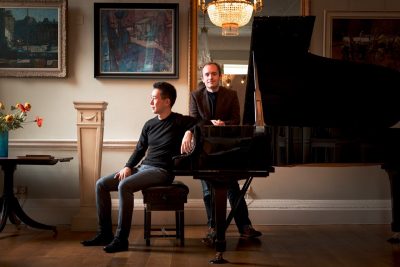 As students of the late Yonty Solomon at the Royal College of Music, Simon Callaghan and Hiroaki Takenouchi met in 2003 and have since had a thriving duo partnership, giving concerts throughout the UK, Europe and Japan.

During that time, they have developed a wide-ranging and extensive repertoire and their engagements have included gala performances with principals from the English National Opera and a number of significant recordings. Their two volumes of Delius’s orchestral works in arrangements for two pianos (mostly world premiere recordings, to coincide with the composer’s anniversary year) on the SOMM label were warmly received, International Record Review (June 2012) describing their playing as “sparkling and sincere” and BBC Music Magazine (July 2012) saying: “Simon Callaghan and Hiroaki Takenouchi … play with such love, panache, and exact synchronisation”. Their latest disc features Saint-Saëns’s arrangements of piano sonatas by Chopin and Liszt, and was released in September 2020 on the Nimbus label.

As well as playing all the mainstream works for both piano four hands and two pianos, the Parnassius Piano Duo are particularly keen advocates of lesser-known repertoire. Recent recital programmes have included works by Medtner and Sterndale Bennett, and in their 2019 disc on the Lyrita label they presented world premiere recordings of two works by Percy Sherwood alongside Parry’s ‘Grosses Duo’ for two pianos. Their own arrangement for two pianos of Rachmaninov’s second symphony was premiered in London in 2017, and will feature on an upcoming recording for Lyrita.

Simon and Hiroaki also have a busy international calendar of solo and chamber music engagements.

Simon has made two recordings for Hyperion’s lauded series The Romantic Piano Concerto, the first (Roger Sacheverell Coke’s Concertos with the BBC Scottish Symphony Orchestra and Martyn Brabbins in 2017) reaching no. 2 in the specialist classical charts. His first solo disc for Hyperion, world premiere recordings of works by Jean Louis Nicodé, was released in May 2019 to critical acclaim, with Gramophone Magazine praising his “superb artistry”. The most recent additions to Simon’s catalogue of solo recordings are sets of miniatures by Schumann and Poulenc on Nimbus, the first complete survey on disc of George Dyson’s music for piano for SOMM and the first disc in his latest project – to record all of Poulenc’s piano music: Babar the Little Elephant, narrated by Miriam Margolyes.

Hiroaki’s premiere recording of Piano Concertos by Georgy Catoire and Percy Sherwood with the Royal Scottish National Orchestra and Martin Yates (on Dutton) forms part of an eclectic discography including works by Haydn, Sterndale Bennett, Schumann and a number of contemporary composers. Hiroaki is also editor of the published scores of the two-piano works by Percy Sherwood (recorded by Parnassius Duo), now available from Nimbus Music Publishing.

Simon and Hiroaki also put great value on teaching, Simon being Head of Piano at the Ingenium Academy while Hiroaki teaches at the Royal Conservatoire of Scotland.

You are welcome to use the above video for concert or general publicity. Please click the share icon in the top right hand corner and use the embed code (< / >) which is then provided.