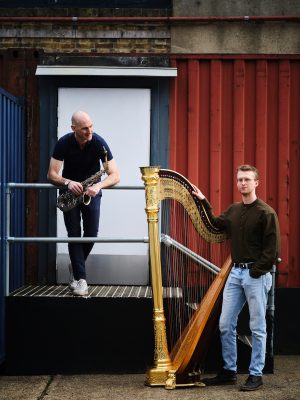 Since forming their duo in 2016, saxophonist Huw Wiggin and harpist Oliver Wass have continued to develop and refine their programmes of music for this unusual pairing of instruments. Huw and Oliver particularly enjoyed their recent concerts for Absolute Classics and Gower Festival, and have developed a reputation as warm communicators who draw audiences into their intimate and engaging performances.

The duo features on Orchid Classics disc ‘Reflections’ which received a four-star review from BBC Music Magazine and five stars from Robert Hugill, who described the duo as ‘a seemingly unlikely combination that works real magic’. The disc reached no. 2 in the UK Specialist Classical Chart and no. 6 in the iTunes Classical Chart. Shortly after the release they were also featured by Classic FM, who filmed and released a video containing a selection of items from ‘Reflections’.

Since winning First Prize and Gold Medal at the Royal Over-Seas League Annual Music Competition in 2014, Huw Wiggin has become one of the most popular saxophonists of his generation.

He has performed in venues as far afield as the Forbidden City Concert Hall in Beijing as well as those closer to home such as London’s Wigmore Hall. Other past highlights include appearances at Brighton, Ryedale, Newbury, Ripon and Edinburgh Fringe Festivals, as well as a recent concerto on the main stage at Henley Festival. His performance of Milton Babbitt’s Accompanied Recitative was broadcast by BBC Radio 3 on ‘Hear and Now’ to celebrate the composer’s centenary.

Huw is professor of saxophone at the Royal Academy of Music in London and has given worldwide masterclasses. He has also been a member of the judging panel for major competitions including the Royal Over-Seas League Annual Music Competition.

In March 2018 Huw featured on ‘BLAKE, The Anniversary Album’, conducted and orchestrated by James Sherlock. Other collaborations include working with singer Laura Wright, harpist Oliver Wass and pianist John Lenehan.

Having studied at Chetham’s School of Music, Royal Northern College of Music and Hochschule für Musik, Cologne, Huw gained a Master’s Degree with Distinction from the Royal College of Music in 2012, also winning the RCM Concerto Prize. Further prizes and awards early in Huw’s career a ‘Star Award’ from the Countess of Munster Musical Trust, a Music Education Award from the Musicians Benevolent Fund, the Philip & Dorothy Green Award, a Martin Musical Scholarship and selection as a Park Lane Group Artist.

Huw is a member of the prize-winning Ferio Saxophone Quartet and regularly performs with them in the UK and abroad. The quartet signed with Chandos Records in 2016 and has released three highly successful discs for the label: ‘Flux’ in July 2017, ‘Revive’ in November 2018, and ‘Evoke’ in October 2021 with pianist Timothy End. Their new collaboration with vocal ensemble the Corvus Consort will feature on their fourth Chandos disc ‘Revoiced’, due for release in July 2022.

Harpist Oliver Wass holds a First Class Masters Degree from the Guildhall School of Music & Drama, where he studied with Imogen Barford. He graduated from the University of York with a First Class Honours degree in Chemistry.

He has performed every major harp concerto, including Lyra Angelica with the Philharmonia Orchestra, the Mozart Flute and Harp Concerto with The Mozartists at the Wigmore Hall, and he has directed the Handel Harp Concerto in the Barbican Hall. Last season, he gave recitals in Rome, Paris, Budapest, Utrecht and London.

Oliver has given recitals at the Purcell Room and Wigmore Hall, where he was praised by Seen and Heard International for his “tremendous dynamism” and “remarkable range of timbres and warmth of tone”.

Playing with “verve and polish” (The Times), his flute-viola-harp trio, The Pelléas Ensemble, won the Royal Philarmonic Society Henderson Award and the 2017 Elias Fawcett Award for Outstanding Chamber Ensemble at the Royal Overseas League competition. In 2016 they won both the Grand Prize and the Audience Prize in the St Martin-in-the-Fields Chamber Music Competition.

Oliver studied with Charlotte Seale at the Junior Department of the Guildhall, where he became the only harpist to have been a prize-winner in the prestigious Lutine Competition. He was additionally Principal Harp in the National Youth Orchestra. He spent his teenage years making fireworks in his parents’ basement, which is – remarkably – still surviving.