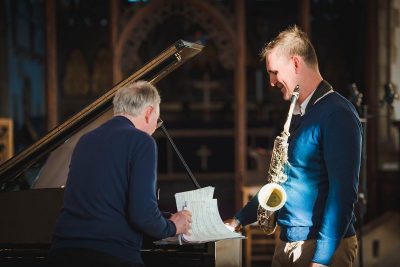 Huw Wiggin and John Lenehan join forces in this duo which has been described as “a sympathetic and imaginative partnership”. The duo came together to record the disc ‘Reflections’, released in June 2018 on the Orchid Classics label, which received widespread critical praise, reaching no. 2 in the UK Specialist Classical Chart and no. 6 in the iTunes Classical Chart.

Since winning First Prize and Gold Medal at the Royal Over-Seas League Annual Music Competition in 2014, Huw Wiggin has become one of the most popular saxophonists of his generation.

He has performed in venues as far afield as the Forbidden City Concert Hall in Beijing as well as those closer to home such as London’s Wigmore Hall. Other past highlights include appearances at Brighton, Ryedale, Newbury, Ripon and Edinburgh Fringe Festivals, as well as a recent concerto on the main stage at Henley Festival. His performance of Milton Babbitt’s Accompanied Recitative was broadcast by BBC Radio 3 on ‘Hear and Now’ to celebrate the composer’s centenary.

Huw is professor of saxophone at the Royal Academy of Music in London and has given worldwide masterclasses. He has also been a member of the judging panel for major competitions including the Royal Over-Seas League Annual Music Competition.

Having studied at Chetham’s School of Music, Royal Northern College of Music and Hochschule für Musik, Cologne, Huw gained a Master’s Degree with Distinction from the Royal College of Music in 2012, also winning the RCM Concerto Prize.

Huw is a member of the prize-winning Ferio Saxophone Quartet, and regularly performs with them in the UK and abroad. The quartet signed with Chandos Records in 2016 and has released four highly successful discs for the label: ‘Flux’ in July 2017, ‘Revive’ in November 2018, ‘Evoke’ in October 2021 with pianist Timothy End, and ‘Revoiced’ in July 2022 in collaboration with vocal ensemble the Corvus Consort.

With more than 70 albums to his credit, reflecting an enormous variety of genres and styles, John Lenehan ranks as one of the most versatile pianists on the classical scene today. Praised by the New York Times for his “great flair and virtuosity” and the (London) Times for “a masterly recital”, Lenehan has appeared in concerts throughout the World from Abu Dhabi to Zurich and from Aberdeen to Zimbabwe.

As a soloist he has appeared with orchestras such as the London Symphony at the Barbican and the Royal Philharmonic in the Royal Albert Hall. He has also collaborated with some of the leading instrumentalists of our time and is recognised as an outstanding and versatile chamber musician.

His many recordings include piano recitals and concertos as well as duo sonatas, chamber music and jazz. His four-disc survey of John Ireland’s piano music received great critical acclaim, including a Gramophone award. His other solo recordings include three discs for Sony Classical of minimalist piano works and a disc of Erik Satie (for Classic FM). Most recently, in addition to working on ‘Reflections’ with Huw Wiggin, John has recorded albums with Tasmin Little and the Rossetti Ensemble, as well as concertos by Mozart and Beethoven with the National Symphony Orchestra.

John also composes, with works published by Faber, Novello and Schotts. His Fantasy on Tchaikovsky’s Nutcracker has recently been recorded by the Budapest Symphony Orchestra. He has written and arranged for a long list of soloists and orchestras including Nigel Kennedy, Tasmin Little, Nicola Benedetti, Leonidas Kavakos and Yuja Wang, the BBC Concert Orchestra, RPO and Hong Kong Philharmonic.