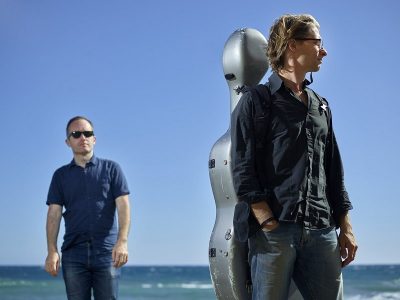 Karel Bredenhorst and Simon Callaghan first met in 2013 when they collaborated at the Whittington Chamber Music Festival. A strong friendship developed and Duo Verzaro now give regular recitals on the continent and in the UK. Their debut CD, recorded in Cervo, Italy, was released in September 2016 and their second recording followed in December 2017.

Dutch cellist Karel Bredenhorst performs internationally as a soloist and chamber musician. His most recent concerts have taken him from Germany, Italy, Great Britain, Austria, Switzerland and Estonia up to Brazil, USA and Nepal.

Karel is founder and artistic director of the Cervo Chamber Music festival, is a member and founder of Cuarteto Soltango, and plays regularly with Pynarello.

During these festivals Karel has performed together with musicians such as Midori, Gustav Rivinius, David Geringas, Jean Sulem, Johannes Erkes, Hartmut Rohde, Martin Ostertag, Alvaro Siviero and Ian Fountain. As a chamber musician Karel substituted in Amsterdam Sinfonietta, the NKO, the Ragazze Quartet and the Matangi Quartet.

Karel studied in Holland with Monique Bartels and with Paul Uyterlinde. In Germany he continued his studies with Troels Svane at the Musikhochschule in Lübeck, where he graduated the soloist class with distinction and the highest grade in all subjects.

Karel was frequently coached by master-cellists such as Gustav Rivinius, Gary Hoffman, Miklos Perenyi, Steven Isserlis, Anner Bylsma and David Geringas. In turn currently Karel is a masterclass teacher during festivals including the European Summer Music Academy, Kosovo and the Southwell Music Festival.

Karel enjoys experimenting with different music styles. He has played with Herman van Veen, the Mozaiek Ensemble and Carel Kraayenhof and is member and founder of Cuarteto SolTango, an exceptional traditional tango group. Karel also improvises as The GoOzer with e-cello and loop-station.

Karel plays a cello by Paul Blanchard built in 1902, Lyon.

Callaghan’s repertoire includes over fifty concertos, highlights of the standard solo and chamber works of the 19th and 20th centuries, and much that is rare and unexplored. One cornerstone of his work is his commitment to British music, and he has recently begun a projected series with Lyrita, presenting world premiere recordings of British concertos with Martyn Brabbins and the BBC National Orchestra of Wales. By the end of 2022 he will have recorded four albums for Hyperion’s celebrated The Romantic Piano Concerto series. Callaghan’s first disc for Hyperion, with the BBC Scottish Symphony Orchestra, formed part of his successful PhD project at the Royal Northern College of Music.

Callaghan has also recorded for Somm, Resonus and EM Records, and has expanded his role to encompass performing and producing in an exciting association with Nimbus Records and The Lyrita Recorded Edition Trust. His reputation and experience in chamber music led to his accepting the role of Director of Music at London’s celebrated Conway Hall, curating the longest-running series of its kind in Europe. He counts among his most important teachers a trio of masters: Bernard Roberts, Yonty Solomon and Frank Wibaut.